Beginning in 2014, FullStack began a partnership with Chef (formerly Opscode) to redevelop Chef’s community site. The Chef community site was a destination for the open source community to browse, download, and share Chef cookbooks. The existing community site had a vibrant and involved user-base, however it had started to become outdated, and was missing several key features. Chef desired to open-source their community site in order to allow contributions to the functionality, but the existing codebase contained proprietary libraries and source code, making open-sourcing it impossible. In order to quickly and efficiently deliver an enhanced open-source community site, Chef reached out to us at FullStack. The new project took on the codename “Supermarket.”

Chef had several goals in mind for Supermarket:

In this article, we’ll take a look at the core features of Supermarket, and how we accomplished those goals.

The main purpose of Chef’s community site was to provide a single directory of the wealth of open-source cookbooks available within the Chef community. From installing MySQL on a Linux distribution to setting up a url rewriting module for IIS on Windows, Supermarket makes it simple to find a specific cookbook. It supports both Full Text Search of the cookbook directoy, as well as the ability to browse cookbooks by most downloaded, most followed, and most recently updated. 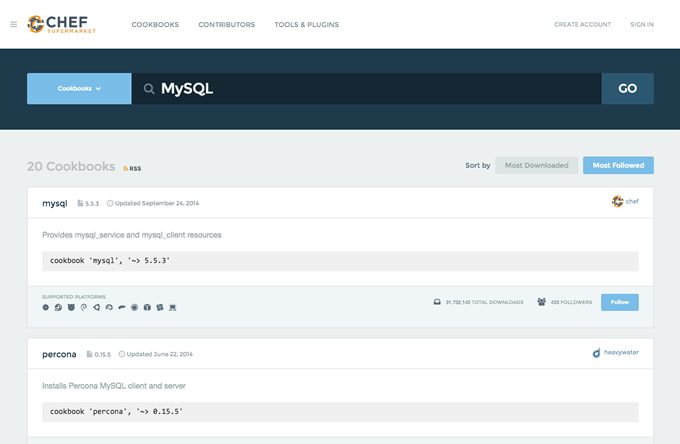 One deliberate departure from the previous Chef community site was the removal of cookbook categories. The initial alpha versions of Supermarket allowed cookbooks to be filtered by category. While categories provide a nice hierarchical structure to the directory, the Chef community ultimately questioned their usefulness in making finding cookbooks easier. The breadth of platforms and types of cookbooks meant that many cookbooks simply were lumped into an “Other” category. Consequently, cookbook categories where not included in the initial release of Supermarket.

In addition to being able to search for cookbooks, Supermarket provides the ability to view the cookbook’s supported platforms, its README file, its list of dependencies (other cookbooks), its CHANGELOG, and a rating of the quality of the cookbook. 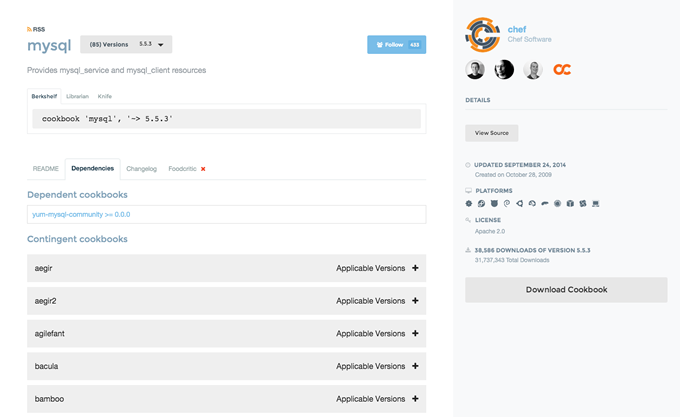 Once a cookbook exists in the directory, Supermarket also gives the author the ability to upload new versions of the cookbook. Supermarket maintains a version history, and will even email the CHANGELOG file, if one is provided, to any users following the cookbook.

Additionally, the cookbook author can designate other users as “collaborators” on a cookbook. Being a collaborator gives them the ability to also upload new versions edits to the community site.

Another goal of the community site was to streamline the process of contributing back to Chef. As the majority of Chef’s products are open source, there is a large number of engineers and developers that contribute back to their projects. Contributing to Chef requires that developers first sign a Contributor License Agreement (CLA). Prior to Supermarket, signing a CLA was a semi-manual process that was cumbersome for all involved. With Supermarket, that process became automated and much more seamless.

Supermarket now provides a simple process to become a Chef-authorized contributor. In order to sign your CLA, you simply click the “Become a Contributor” button on Supermarket , after signing in with your Chef account. After linking your GitHub account to your user profile, you’ll be prompted to read and accept the Contributor License Agreement. Simply agree to the license, and you immediately are authorized to contribute back to Chef’s open source projects.

Finally, Supermarket contains a directory of other Chef open source tools in addition to cookbooks. Supermarket makes it easy for authors to share the different plugins that they’ve written to enhance the Chef ecosystem. These tools and plugins come in many different flavors, but mostly are enhancements to Chef’s existing suite of projects, such as Knife, Ohai, and Chef Server. 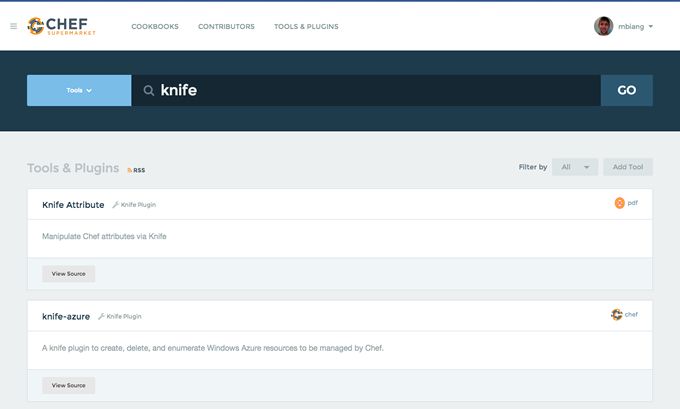 We’ve had a great time working with the Chef team to build Supermarket. It has a wealth of other features not documented here, so to learn more about it, we’d recommend creating an account, and using it yourself!

During the rest of this series of posts on Supermarket, we’ll be exploring some of the challenges we faced while building this platform, and some of the exciting things we’ve learned. Stay tuned!